Do Different Types of Tennis Courts Change the Way We Play the Game?

You may have noticed titles such as “King of Clay” being assigned to players like Rafael Nadal, with his win rate on the surface being significantly higher as compared to his counterparts. This raises a few questions. Does the type of court really matter? Do we have to play differently on each surface?
The answer is yes, and the different kinds of surfaces have different properties requiring different playstyles:
Clay Court
There’s a slight misconception with clay courts, as they are made out of crushed brick. Clay courts are the slowest surface, and the ball generally bounces slow and at a height, so hitting those killer serves isn’t easy. Consecutively hitting great shots is required to get the opponent in a tough spot, which is difficult due to the inconsistent bounces on the ball. It’s critical to play with topspin on clay. 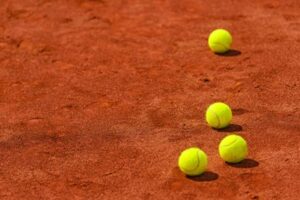 You can slide on clay courts, being able to strike the ball while you’re in motion. It prevents strain and stress on your ankle, knees, and other parts of your body, which, in general, is useful for avoiding multiple potential injuries. It makes it an excellent option to play on clay rather than the alternatives, though you might require special shoes to help you play appropriately on the surface.
Hardcourt
Hardcourts are asphalt or concrete layered over different materials. The ball bounce is generally faster and higher, but much more predictable than a grass or clay court. Thus, hardcourts are very popular, and players are advised to practice heavily on this surface. It helps them work on variation and newer strokes for a more dynamic playstyle.
Not everything is all rainbows and butterflies for this surface, as most of the injuries for players occur on hardcourts. Concrete and asphalt aren’t exactly foot-friendly surfaces.
Grass Court
Grass courts were the original surface for playing tennis, but their popularity has started to diminish. They are mostly found in professional tennis courts, as maintenance is difficult and takes up a lot of time. Ball bounce is swift and low and unpredictable like clay surfaces. At the same time, it is a softer, foot-friendly surface, it’s rough on the knees because you have to bend the knees to stay low.
Grass courts require you to serve hard, fast, and play aggressively, getting close to the net and making devastating plays.

Looking to Sell a Tennis Club? At EKM Sports, we’re looking for opportunities to get in touch with tennis and racquet club owners looking to sell their establishments, provide them with complete discretion and confidence to purchase their facilities.

To begin a confidential and discrete discussion regarding your indoor athletic facility:

Subscribe to our newsletter to receive the latest news and updates by email.